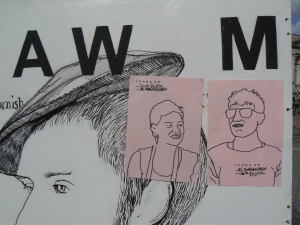 On June 29th is Bawning the Thorn 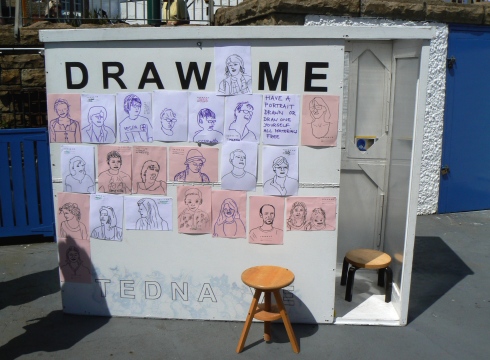 The Draw Me Booth with gathered images adorning

The Tedna Ve – Draw Me booth is an installation. Tedna Ve means Draw Me in Cornish Language, this is perhaps a minor item but it is my wish to give others the benefit of knowing about the existence of a complete culture in Cornwall that existed long before English became popularized. The Tedna Ve – Draw Me is also a Booth or if you prefer the term, Kiosk please go ahead and call it the Tedna Ve Kiosk. It is also a Camera Obscura, one that I have constructed specifically for use in portraiture. Almost everyone you talk to knows that the Camera Obscura is Latin for Dark Room – unlike the Cornish for Draw Me, and that it is simply a box with a hole in one end, a small hole that can project an inverted image onto the opposite wall. My installation uses a lens and a mirror to direct the inverted image onto a little easel, thats where You draw Me or visa versa.  As an experience drawing a likeness in the Tedna Ve Kiosk is a lot of fun, the artist doing the drawing can see the face of the person they are drawing projected upside down, that way no-one can be influenced by what they know or what they think the person being drawn would “like” to see! Among the squeals of delight that emerge from the installation as the artist struggles to draw the blinking eyes or the constrained smiles of their subjects face there is the knowledge of rudimentary photography and physics, optics and image making in the eye of the artist or hardware of the media.

Camera Obscura’s were seen all over the U.K. in seaside resorts and tourist hotspots, they were mostly diversions or novelties for leisure pastimes, they were set up for looking at the landscape, town-scape or seaside never for as an aide to drafting a portrait. The painted image on the side of the Tedna Ve Installation is a crude copy of John Reskimmer – Cornish Gent by Hans Holbein the younger. Did Holbein come to Cornwall?  John Reskimmer was a member of the outer circle of the court of Henry VIII, Tudor king of England, chances are that Reskimmer had to go to Hampton Court than Holbein risking life and limb across Dartmoor in order to get the superb portrait.

Although camera obscura’s were discovered by Hassan ibn Hassan an Arabian Scholar (aka Ibn al Haitam) in 10th century, he wrote about the Suns eclipse and early Chinese interest in Sun Spot activity is widely acknowledged.

Bawning the Thorn on St.Peters Day in the Parade Ground 29th June 2010 Chelsea College of Art London SW1P 4JU (opposite TATE BRITAIN) The Seasons turn through springtides to summer solstice, obscured by these celebrations old Bawning The Thorn on St.Peters Day will also be a time of making likeness’s, of creative interaction and a moment of respite before the heady spring blossom turns to heavy red fruits. Come one come all unless the apples are christened on St.Peters Day the crop will not be good.

Up with fresh garlands in midsummers morn,

Up with red ribbons on Appleton Thorn,

Come lasses and lads to the thorn tree today,

To bawn it and shout as ye bawn it “hurray”

Rather the Draw Me/Tedna Ve Portrature Installation is the focus on the Parade Ground in lieu of an orchard or a tree, where portraits simple and true can be made on paper in the traditional upside down image fashion, come and participate by making a drawing, being in a drawing and marking this special day.

The Draw Me Booth was sited at Manchester Royal Exchange 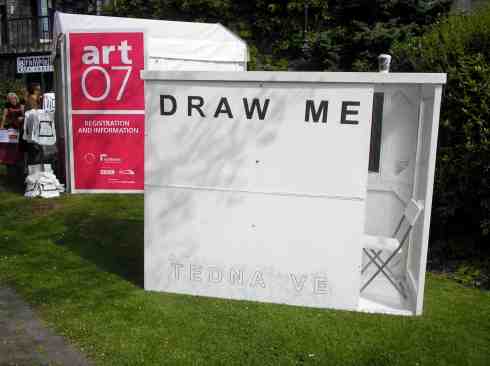 The earliest record for the uses of a Camera Obscura can be found in the work of Leonardo Da Vinci (1452 – 1519) At around the same time Daniel Barbero, a Venetian recommended the apparatus as an aid to drawing and most importantly; A way to configure perspective which was quite literally a new way of seeing the world and this is reflected in both the history of painting and the history of scenography. 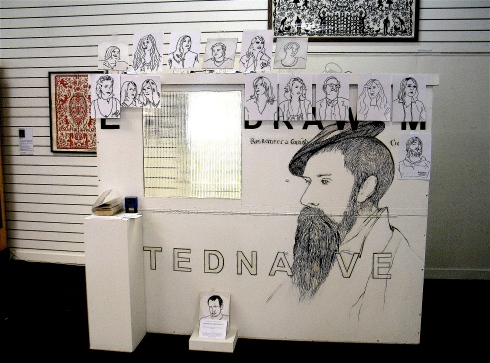 Giovanni Battista della Porta (1538 – 1615) was reputedly taken to court after inviting a crew of dignitaries along to his spacious camera obscura, once seated the guests were to see a troup of actors performing outside the device projected upside down on to an interior wall, the sight caused panic and confusion among the guests who ran for their lives! 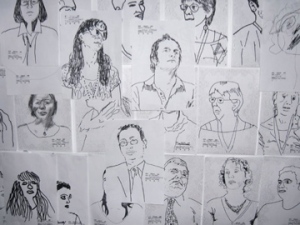 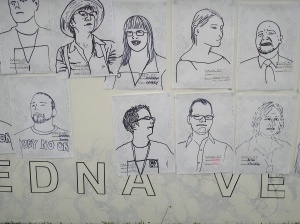 Caneletto, Vermeer, Joshua Reynolds and many other painters benifitted or experienced the Camera Obscura, Gerolomo Cardano, an Italian mathematician introduced bi-convex lenses which improved the light bearing qualities we now rely upon in all instruments. The word “Lens” is reputedly referring to the Lentil like shape of a bi-convex glass lens. Some of the first camera’s were enormous structures other versions appeared as Sedan Chairs but going back to Holbeins improbable journey over Dartmoor in a converted Camera Obscura Sedan Chair, it is an interesting if unvalidated idea that the young dashing Hans Holbein who graced the European Royal Courts as though the first celebrity style Pop-Artist, painting the entire Tudor household with an incredibly beautiful line (metal point), got a severe grumble from the ultra traditionalist Albrecht Dürer who accused Holbein of using a Camera Obscura like he was accusing him of some serial killings in the Black Forest. 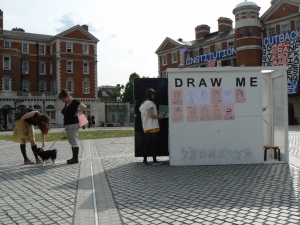 For at the eye the Pyramidal rayes from the object, receive a decussation, and so strike a second base upon the Retina or hinder coat, the proper organ of vision; wherein the pictures from objects are represented, answerable to the paper, or wall in the dark chamber; after the decussation of the rayes at the hole of the hornycoat, and their refraction upon the Christalline humour, answering the foramen of the window, and the convex or burning-glasses, which refract the rayes that enter it.

The physician and author Sir Thomas Browne; The Garden of Cyrus 1658

David observing his likeness on old Bawning the Thorn day

Chris upholding a likeness on Old Bawning The Thorn Day 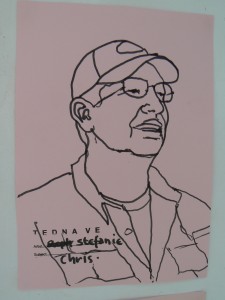